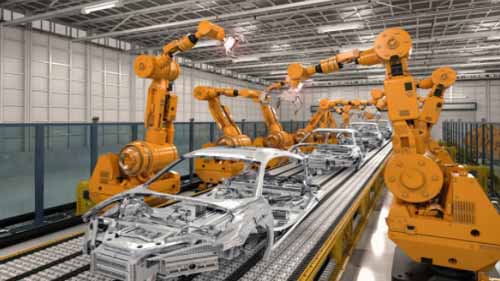 Assembly is an important part of industrial processes. It is the penultimate step where components of a product that have been produced separately are put together to make it complete. It is a make-or-break process that often makes the difference between products that pass the quality test and reject units.

Given the importance of proper assembly, it is essential that it is done with high precision. Factories, on the other hand, prefer that it is done fast to save on costs and maintain a high rate of production. Out of this necessity arose assembly robots. If you are considering investing in some, here is an all-you-need-to-know guide on why and how they can be applied.

What are Assembly Line Robots? 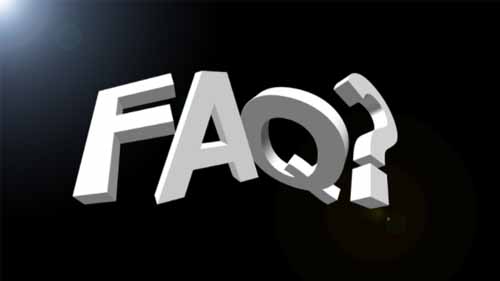 An assembly line robot is a programmed machine that is used to join constituent parts of a product into one. Compared to human labor, assembly robots are fast and have a mechanical precision that human beings may not be capable of achieving. Other factors such as their capability to handle higher payloads when assembling large parts also make assembly robots fundamental in manufacturing.

An assembly robot is made up of the following parts:

An assembly line robot arm- this is a flexible manipulator that is used as a substitute for the human arm to lift and place the parts being assembled. This type of robot arms is designed with different payload capabilities and reach to make them suitable for assembling different products.

End-effector- an end-effector is a tool affixed to the end of an assembly robot arm to enable it to pick up the parts that are to be assembled. They vary in design based on the part. Examples include grippers, adhesive dispensers, and suction tools used to handle glass.

Sensors – sensors guide assembly robots by detecting parameters such as how much force they should apply when installing a part or how they should position it.

Vision systems- vision systems are usually installed near the end of an assembly robot arm. They help to make it more precise as they enable the robot arm to ‘see’ the part and where to position it.

What Do Robotic Assembly Systems Consist of? 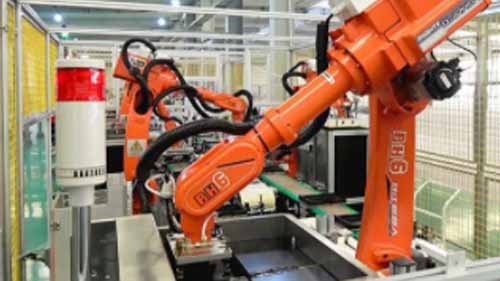 A robotic assembly system comprises a series of assembly-line robots that work in tandem to assemble product units. This is usually applicable when a product has different sizes and shapes of components because they would require to be handled by different assembly robots. A conveyor kind of system passes the unit being assembled from one stage of assembly to the next.

While all the robots in an assembly system are designed for assembly, they may not necessarily be identical. Their payloads and reach may differ based on the parts they are handling. The end-effectors they are fitted with are also chosen to match their task.

Different types of robots are suited for unique types of assembly processes. This is predicated on how many degrees of freedom they have and the payloads that they can handle. The main types of robot arms used as assembly robots thus include 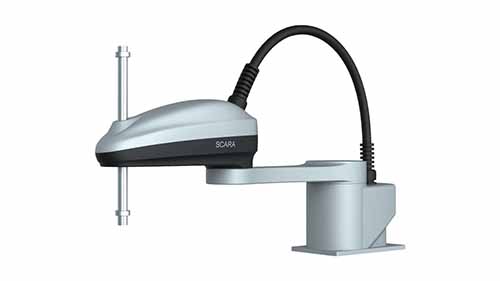 SCARA robots are flexible on the XY axis and rigid on the Z-axis. This makes them ideal for assembly processes where they can pick parts on one side and assemble them on another along a parallel plane. They cover a wide cylindrical work envelope and can handle sizable payloads. Other merits of using a SCARA robot for assembly include:

High speed because their compact arms contend with less torque

They have high accuracy and repeatability

They can handle small parts effectively 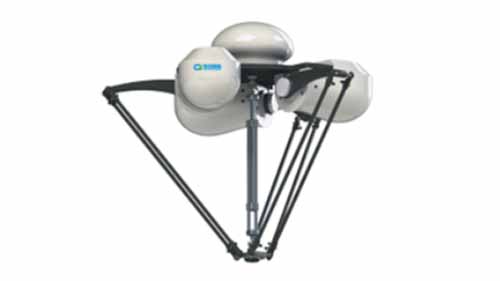 Delta robots consist of three triangle-shaped robot arms mounted on a base with each arm being powered by its own servo motor. When a delta robot is applied in an assembly line, it is mounted overhead. This provides more stability to the robot arms and reduces the amount of torque they experience when lifting parts during assembly. As a result, they work extremely fast and are highly accurate especially when fitted with sensors.

Given their structure, Delta robots can only handle small payloads. This is perhaps the reason why they have only recently begun to be used in assembly lines. That notwithstanding, they are very efficient in assembling small components like mobile phone screens or covers among other things. 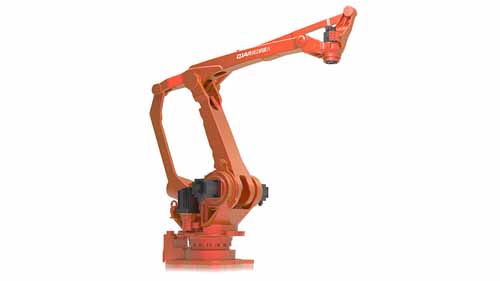 Articulated robot arms have multiple revolute joints which make it possible for them to flex in different directions. It is this high flexibility that is harnessed when they are used for complex assembly processes. They are particularly effective where parts need to be turned or maneuvered during installation.

Due to the multiple joints in their structure, articulated robot arms are slightly slower compared to other robots. Nevertheless, what they lack in speed they make up for by being able to handle heavy payloads, cover large work envelopes and reach over and under to install parts. They can equally be made even more effective by fitting them with vision systems.

Application of Robots in Assembly 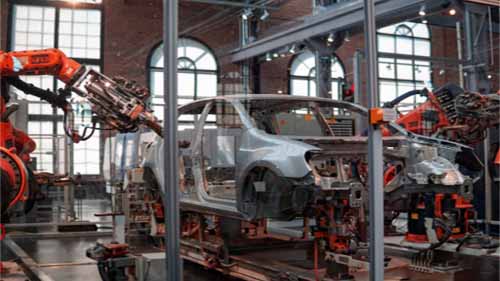 Assembling electronic micro parts- the internal parts of electronic devices comprise a series of micro parts that would be difficult for the human eye to keep track of. They are even harder to assemble especially in complex arrangements like circuit boards. It is thus more effective to use assembly robots like SCARA and delta robots that can handle small parts with ease and precision.

Automotive assembly – cars are made of hundreds of parts that vary in size. Automotive assembly is thus done through a robotic assembly system with different parts being installed in stages. Given the amount of maneuvering required to reach inside the shell of a car to install parts, articulated robot arms are the most commonly used for this type of assembly.

Adhesive assembly – this is a type of assembly where parts of a product have to be joined together using industrial-strength adhesive. It can be risky for human staff to inhale such fumes or if their skin were to come into contact with such adhesives. For this reason, assembly robots like SCARA can be used to dispense the adhesive while another fitted with a gripper can join the parts further down the assembly line.

Cleanroom assembly- medical devices such as artificial hips and treatment instruments have to be manufactured in sterile environments and with high accuracy. Robotic arms that are sterilized and have ingress protection for easy cleaning are suitable for this kind of production. They are much easier to maintain sterile conditions around and unlike humans, they do not require sanitary gear every day. 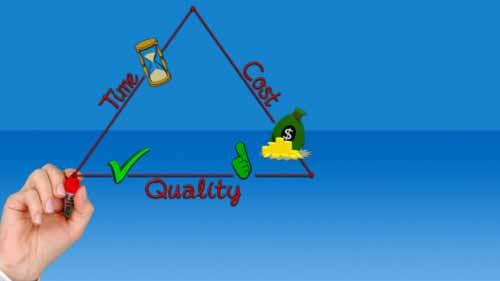 High speed – the longer it takes to assemble a product unit, the higher the costs of production. Moreover, long production times can delay your supply chain. Assembly robots work much faster than human labor and keep your production line running throughout the clock.

Precision – poorly assembled parts result in an overall poor quality product. A pipe valve, for instance, that is closely put together would end up leaking when it reaches the consumer. The mechanical accuracy of assembly robots eliminates such production errors.

Cost efficiency- one assembly robot puts together product components faster and more accurately than a few human workers can. While the initial cost of a robot may be high, in the long run, it is much cheaper than a bloated and recurring wage bill. Fewer errors also cut down on wastage which equally saves you money on the production front.

Standardization of quality- the high repeatability of assembly robots yields finished products that are identical in design and quality. This is important as it gives your products consistency as opposed to relying on human labor whore each worker has different levels of skills.

Improved safety – assembly processes can be risky for staff in a myriad of ways. Lifting heavy components, applying adhesives, nailing parts together and similar processes can go awry at any time. By assigning these tasks to assembly robots workers can take on safer, more rewarding, and less strenuous responsibilities. 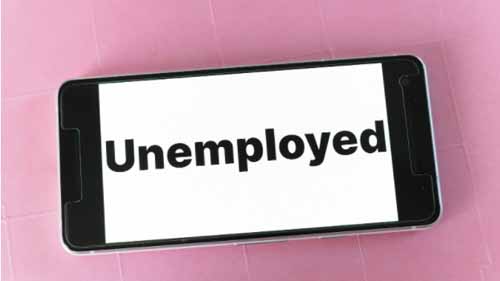 Job loss– when tasks that were initially performed manually become automated, some employees transition to other positions but most end up redundant. This loss of livelihoods is why many people are averse to the idea of robotics advancing any further than it already has.

Safety issues- assembly robots for large parts such as those used for large electronics or vehicles require ample floor space not just to fit but also for safety. Unless they are collaborative robots with safety sensors, it would be dangerous for workers to work in close quarters with assembly robots. Collisions and other accidents can occur at any time if a safe distance is not maintained. This may also hamper you from incorporating them if your factory is not large.

High investment costs -the benefits of assembly robots are undeniable but their costs can be rather high as well. Such costs not only include the costs of purchase but also those of regular maintenance and the losses incurred during unexpected downtimes.

There is much to be gained by investing in assembly robots. However, the gains can only be realized if you choose the right robot for your setup. Finding a certified assembly robot manufacturer that offers durable high-quality units could equally make your transmission into automated assembly much smoother.

EVS Robotics is an industrial robot supplier providing automation solutions and support to our customers. Our products are used in industrial automation such as welding, painting, handling, palletizing, bending and polishing. And after years of development, our core technology has been widely used in different industries like Automotive, Metal Industry, Food & Beverage, Medical & Pharmaceutical and more.

Copyright ©EVS TECH CO., LTD All rights reserved.All materials not authorized may not be redirected or for other usages.